Princesshay’s City Bee project is a hive of activity 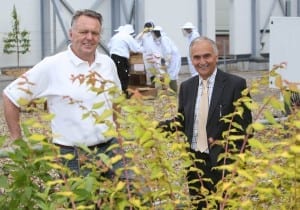 Princesshay’s City Bee project now numbers 45,000 honey bees, increasing from 10,000 in 2013, living in the rooftop garden above the Exeter site which hosts a variety of fruit trees and bee friendly flowering plants.

The rooftop garden paradise of Princesshay continues to grow and thrive above the busy shoppers of Exeter. The introduction of the honey bees was part of an environmental initiative championed by joint landlords Land Securities and The Crown Estate in 2013. Forming part of a biodiversity strategy, the garden now hosts four hives with the aim to increase the number to five by the end of 2014. Princesshay is one of the first shopping centres in the Land Securities portfolio to launch a City Bee project.

Andrew Littlejohns, Princesshay Operations Manager investigated the idea of housing ‘City Bees’ in Princesshay after watching a television programme on the decline of the honey bee and subsequent impact on the environment. After obtaining the relevant advice and guidance from appropriate bee- keeping consultants and various site meetings, plans progressed quickly from inception in February 2012 to the arrival of the first Princesshay bee colony in April 2013.

Andrew Littlejohns, Princesshay Operations Manager said, “We’re thrilled to see the success of our City Bee project. Our bees produced a small amount of honey at the end of last summer which was fantastic. This year our bees are expected to produce around 40lbs of honey and for the first time our fruit trees should bear fruit. Both the honey and fruit will soon be on sale at various retailers within the centre with all proceeds going to our local charity of the year, Dream-A-Way.

“Staff members from our retailers and restaurants formed a team of bee keepers who were trained via the Princesshay scheme last year. This year we are extending the invitation to anyone looking to get involved and who can spare an hour each Thursday with Bee Keeping Consultant Jason Wallis from WeeTree Nurseries.  The new team of Princesshay Bee Keepers will manage and care for the project in the next 12 months and beyond.”

Princesshay has invested in professional Bee Keeping equipment for the team and created a storage area on the rooftop for the kit.

Jason Wallis from WeeTree Nurseries started keeping bees almost 10 years ago to help with flower production at his nursery and it fast became a hobby and passion. Jason said, “It’s a privilege to be working with Princesshay and being part of the team that has made the City Bee project a reality and a huge success. The bees have survived the winter and have increased in numbers which is great to see. We’ll soon be separating the current colonies from four hives into five to allow the bees to mature and continue with their honey production. The environment created by Princesshay on their sheltered roof top is fantastic. The decline of the honey bee is a well documented problem and projects like this all help to keep this important species part of the UK habitat. I encourage everybody to help make a difference simply by planting bee friendly plants in their gardens.”

The project has already attracted much attention and interest from local artists and photographers to schools and educational projects. Princesshay’s shops and restaurants are also proud of the project and anyone else looking to get involved should contact Princesshay Centre Management on 01392 459838.

Find out which stores in Princesshay offer click and collect by clicking here.